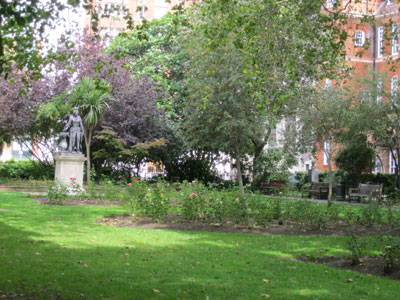 Walk towards the Café in the Gardens. There is an accessible toilet here. Leave the square via the gate to the rear of the café. Cross at the traffic lights and turn right past the front of the Hotel Russell and left into Guilford Street. Cross over Herbrand Street and continue on for a short way, crossing over opposite the entrance to an underground car park. Take the pedestrian path beside it, which continues through into Queen Square.

Walk straight ahead and enter the square garden by the gate on the left. Walk to the middle of the square

Leave the square by the gate ahead of you and look to the left.

Queen Square was originally known as Devonshire Square and was laid out in 1716 on land owned by Sir Nathaniel Curzon. It was renamed in honour of Queen Anne, the reigning monarch.

Houses were built around the square from 1713 to 1725, but the north end was left open to give a view of the villages of Hampstead and Highgate. The writer Fanny Burney (1752-1840) lived on the south side of the square in the 1770s, and wrote in her novel, Evelina, of the ‘beautiful prospect’ from her house ‘of the hills, ever verdant and smiling’.

An Act of 1832 provided that the square was to be ‘used and enjoyed by the inhabitants thereof in such a manner as the Trustees shall direct’. It was maintained by a rate ‘not exceeding one shilling in the pound, assessed on buildings around the square’.

Looking north, you will see a lead statue of a queen in ornamental robes, which originally held a sceptre. It is thought to be of Queen Charlotte, wife of George III, but could possibly be Queen Anne or Mary II.

A circular paved area on the north lawn marks the spot where a Zeppelin bomb fell during the First World War. Although around 1000 people slept in the surrounding buildings, no-one was injured. During World War 2 around 2,000 people slept in an air-raid shelter beneath the square.

To the south, the church of St George the Martyr, established in 1706, was once known as the sweeps' church because kind parishioners provided Christmas dinners for 100 chimney sweeps' apprentices or ‘climbing boys’. It was here that poets Ted Hughes and Sylvia Plath married in June 1956.

The Queen's Larder at number one dates from 1710. Tradition has it that Queen Charlotte rented a cellar under a beer shop to store the king's food while her deranged husband, George III was being treated by his doctor, Dr Willis, for his recurrent bouts of madness.

The square is also notable for the number of medical institutions based here. The London Homeopathic Hospital has been here since 1859, and the Italian Hospital since 1884, when Holborn was the main location for London's Italian community.

The National Hospital for Neurology and Neurosurgery stands on the site of No. 29, once the home of Jerome K. Jerome (1859-1927). Jerome was a railway clerk who became an actor and then went on to write the Victorian classic and bestseller Three Men in a Boat (1889).

In 1865, William Morris moved his furnishings business, Morris, Marshall, Faulkner & Co, from nearby Red Lion Square into number 26. Morris and his family lived ‘over the shop’, which was on the ground floor, and a ballroom was converted into workshops at the back. It was during this time that Dante Gabriel Rossetti and Janey, William Morris's wife, fell in love – a relationship that was to cause Morris great pain, although he never tried to interfere.

Previous
Stage   Next
Stage   Audio
Guide
Map   Back to
Outline