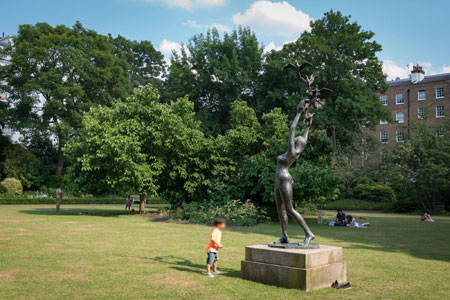 If you are visiting this garden on Open Garden Squares Weekend, be careful to check the opening times.

In 1717 Charles, second Earl of Cadogan, married Elizabeth, daughter and heiress of Sir Hans Sloane, lord of the manor of Chelsea. In 1777 their son leased 100 acres of land to architect Henry Holland (1745-1806) for building development.

After the Great Fire of London in the previous century, wealthy Londoners had not wanted to return to the crowded, dangerous conditions of the old medieval City. Instead they flocked to the new estates being built in the countryside to the west of London.

These self-contained communities, based around squares, offered a different, healthier way of life. Thousands of wealthy people migrated to live in the new West End, while continuing to do business in the City, becoming in effect London's first commuters.

The building lease system, which had first been used by Lord Southampton in Bloomsbury Square, was very popular with the owners of country estates close to London. Plots were leased to builders at a low ground rent, usually for 99 years, after which the land and houses became the property of the landowner again.

Henry Holland built what he called 'Hans Town' on Lord Cadogan's land, consisting of Sloane Square, Sloane Street, Cadogan Place and Hans Place. The simple terraced houses of stock brick became immediately fashionable among the upper middle and professional classes. Charles Dickens described the area in Nicholas Nickelby as the connecting link between 'the aristocratic pavements of Belgrave Square and the barbarism of Chelsea'.

Cadogan Place was the first square to be developed by Henry Holland, together with Sloane Square. The garden is divided into two parts. The southern part, which you are walking beside now, was once known as the London Botanic Garden, and was laid out at the end of the 18th century by William Salisbury (d. 1823-9), containing a library, hothouse, greenhouse and conservatory.

No. 43B was where anti-slavery campaigner William Wilberforce (1759-1833) spent the final days of his life, at the home of his cousin. Wilberforce and others campaigned for almost two decades to bring an end to the British slave trade, finally succeeding in 1807. Three days before his death in 1833, he heard that the bill to abolish slavery altogether had been passed, the culmination of his life's work.

No. 30 was home in the 18th century to the highly popular Irish comedy actress Dorothy Jordan (1761-1816). She had many lovers, and for 21 years was mistress to the Duke of Clarence, who later became King William IV. Mrs Jordan had 10 children by the duke, to add to the five she already had! She was known for her wit: once when the duke suggested reducing her allowance, she sent him a note, saying ‘No money returned after the rising of the curtain!’

Previous
Stage   Next
Stage   Audio
Guide
Map   Back to
Outline