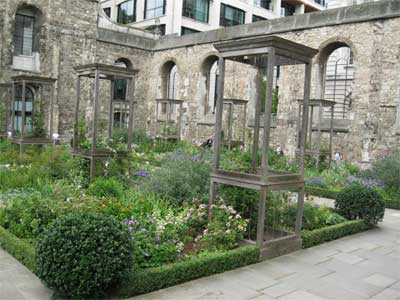 In the Middle Ages this was the site of a Franciscan monastery and today’s garden is on the site of the Franciscan Church of Greyfriars (1225). Following the dissolution of the monasteries under Henry VIII, it was converted for use as a parish church. In 1429 Richard Whittington, Lord Mayor, founded a library here.

Numerous well-known people, including four queens, were buried in the old church, which was destroyed in the Great Fire of 1666. A new church, designed by Sir Christopher Wren, was built between 1687 and 1704. The body of the Wren church was gutted by fire in 1940 during WW2 – only the west tower now stands.

A major overhaul of the gardens took place in 2011, when the garden was stripped of all its planting. Major soil improvements were carried out, along with some hard landscaping improvements. The new planting design was implemented to reflect the current trend in garden planting and to increase bio-diversity.

The garden, which now consists of heavily planted herbaceous borders, also includes a variety of modern repeat-flowering shrub roses and climbers. The concept, although based on ‘traditional herbaceous planting’, does also incorporate a more modern interpretation within its planting palette.

The garden has a colour scheme of mainly blue, purple and white, with shots of deep crimson, silver and lime to bring it to life, all contained within low, clipped box hedging. The wooden towers within the planting, which replicate the original church towers, now house a variety of discreet bird boxes to encourage the bird population. These towers also host a variety of climbing plants.