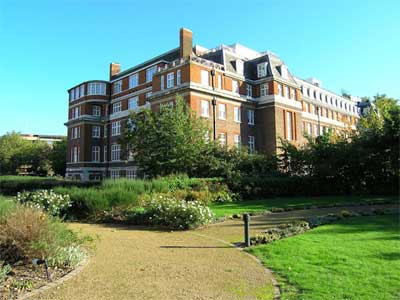 Leaving the square by the same gate, walk straight ahead up Merlin Street. Cross Amwell Street at the zebra crossing, turn right and immediately left into Hardwick Street. On the left near the junction with Rosebery Avenue is the private communal garden of New River Head, former headquarters of the Metropolitan Water Board, now a residential development. Turn left and continue along Rosebery Avenue, past another private communal garden belonging to the Laboratory Building (1936-38) in Modern Movement style. Rose beds and a large fountain are visible through the railings. Sadlers Wells Theatre, ahead of you, has a restaurant, bars and accessible toilets. Turn left into Arlington Way and left again into Myddelton Passage. At the end of the passage, turn left through the second gate in the wall (if open) to reach a viewing platform overlooking the New River Head development.

The New River was an aqueduct, built between 1609 and 1613 by City banker and MP Sir Hugh Myddelton. The river was the main source of fresh water from Hertfordshire to north London and the City until around 1990. The water flowed into the Round Pond at New River Head, where a water house controlled supply to surrounding houses. A further reservoir, the Upper Pond, was constructed in 1709 and later developed as Claremont Square. From the 1680s, natural springs around the reservoirs were developed as commercial spas for their medicinal properties. The water house was demolished to make way for the headquarters of the Metropolitan Water Board, which took over from the New River Company in 1904. The grade II listed building, built in 1919 on part of the Inner Pond, is now in private residential use (converted 1997-8), and its garden occupies the site of the Outer Pond.