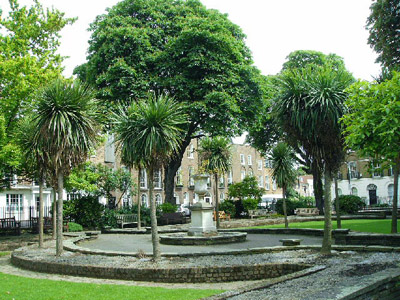 Leave the gardens via the gate at the far end, and turn left into Canonbury Lane. Carry on across Compton Avenue, into Canonbury Square. Pass through the first part of the gardens, then cross the main road at the traffic lights, entering the square by the gate on the right.

Laid out in 1800, Canonbury Square was the earliest of the Islington squares, and was also developed by Henry Leroux, together with Richard Laycock, on land owned by the Marquess of Northampton. The 4th Marquess of Northampton opened the square gardens to the public in 1884, and in 1888 it was conveyed to Islington Borough Council. The layout of the gardens changed in the 1950s, when it was described as 'London's most beautiful square' by the Evening Standard. The square is surrounded by reproduction railings, the originals having been lost during World War II. The planting was improved by Loire Valley Wines in 2006, with roses, lavender and a small vineyard at its centre. Famous former residents include writers Evelyn Waugh and George Orwell, and artists Duncan Grant and Vanessa Bell.