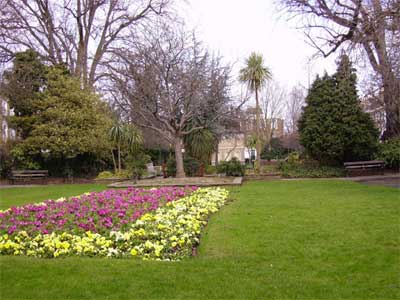 From the passage where you entered the square, continue straight on, turn left into Milner Place, and continue into Gibson Square. Walk to the right around the square to the entrance gate on the left.

Gibson Square, the first of two squares built as part of the Milner Gibson Estate, was laid out from 1832 to 1839 by architect Francis Edwards, a pupil of Sir John Soane. The garden was originally open to residents only, but in the 1930s it had become rundown and was surrendered to Islington Council for upkeep. During WW2 the garden was dug up for air raid shelters and later replanted. In 1963, a proposed ventilation shaft for the new Victoria Line, in the form of a 50-foot concrete structure, was staunchly opposed by residents. This resulted in the simulated classical temple with domed roof which stands in the garden today, designed to be in harmony with its surroundings. The work was carried out in the early 1970s, when London Transport also restored the garden and replaced its railings.