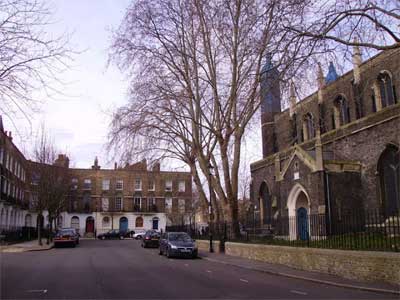 Walk diagonally through the garden and leave by the gate on the opposite side. Turn right, and right again into Theberton Street. At the end, turn left into Liverpool Road, cross at the zebra crossing and continue into Cloudesley Square.

Cloudesley Square was begun in 1825 by carpenter John Emmett, who leased land from the Cloudesley Estate and built along the Liverpool Road from 1824 to 1826. A hexagonal railed garden at the centre of the square surrounds Holy Trinity Church by Sir Charles Barry, built 1826-29, the third of his Islington churches. The square is named after 16th-century landowner Richard Cloudesley, who gave land to the church. The church's stained glass east window of 1828 shows Cloudesley kneeling. Holy Trinity was the district church until the 1850s, when it was replaced by St Andrew's at Thornhill Crescent. In 1980 it was leased by the Pentecostal Sect as the Celestial Church of Christ, at which time the railings were also restored.