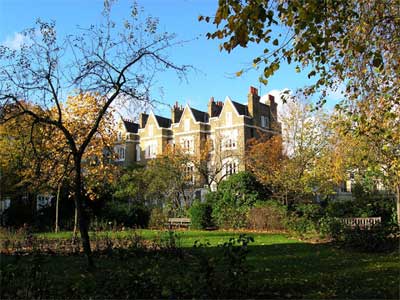 Lonsdale Square was built 1838–45 by Richard Cromwell Carpenter, surveyor to the Drapers' Company Estate. In 1690 the Drapers' Company had inherited the land, known as 'Gosseyfield' and once used to pen cattle on the way to Smithfield Market. Unlike most of Islington's squares, the garden remained private until the 1960s, when they were offered to Islington Borough Council for the nominal sum of £50. The railings, removed in WW2, were replaced in the early 1970s, when the garden was restored.