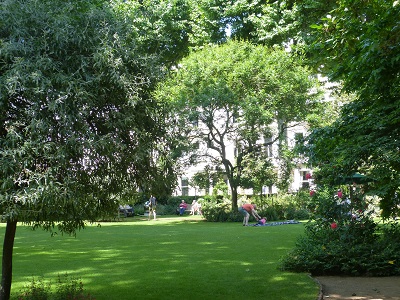 Bramham Gardens leads into the Earls Court Road. On the far side is Earls Court Square, with its stucco-fronted Italianate houses. The garden is entered from the south.

Earl's Court Square was developed as part of the Edwardes Estate. Building of the square began from 1868/72, the south side the last to be completed. The name derives from the courthouse of the Earls of Warwick and Holland, formerly Lords of the Manor. The communal garden for the use of lessees of the surrounding houses was a simple rectangle with grass, paths leading to a central circular feature and around the perimeter; at one time there were tennis courts. In later years poor maintenance by the owners led to the formation of a Residents Association, who sought to rectify this. A Garden Committee was established in 1974 and improvements have included new steel railings, an irrigation system and flood-lighting, new garden shed, circular seating around the central plane tree and children's play equipment.