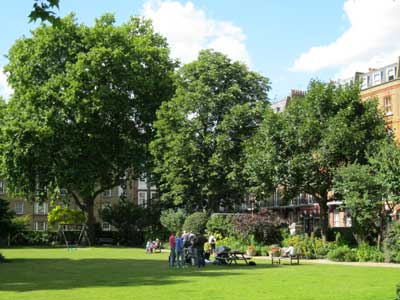 On leaving Earls Court Square through the south gate, turn right and right again into Warwick Road, passing the main entrance to the massive Earls Court Exhibition Hall on the left. Take the next turning on the right, which is Trebovir Road (don't miss the charming little white cottage labelled '1888'), which leads into Nevern Square. The entrance to the garden is on the east side.

These private communal gardens were provided for the residents of Nevern Square, built in 1880-82 as part of the development of the Edwardes Estate. The garden was laid at an early stage of the development. William Edwardes, whose father had married into the Rich family who owned the Earl's Court Estate, had become Baron Kensington in 1776 and by the early C19th it was the largest estate in Kensington. The family's links with Pembrokeshire are reflected in street names, Nevern or Nanhyfer taken from a Welsh parish and river. The garden was purchased by local residents in 1974, who formed a non-profit-making company. Seven plane trees may have been part of the original planting, and the garden has a wide variety of trees.