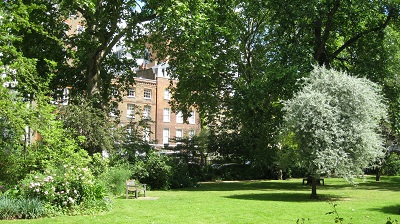 This is one of the earliest of London's garden squares, providing private communal gardens for residents of Kensington Square, which was laid out from 1692 in the centre of Thomas Young's development at Kensington. Originally called King's Square after James II, Kensington Square was largely surrounded by fields until 1840. Among famous residents were the painter Edward Burne-Jones, philosopher John Stuart Mill and musician Sir Charles Hubert Parry.