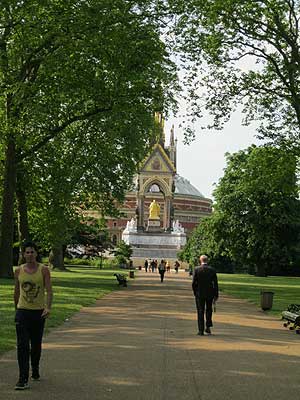 Kensington Gardens is the former gardens and park of Kensington Palace, established when William III purchased Nottingham House in 1689, incorporating land from Hyde Park. The westernmost strip is in Kensington & Chelsea and contains Kensington Palace and its gardens. Remnants of the early C18th landscaping designed by Bridgeman and Switzer and subsequently by Kent, include the Broad Walk, Round Pond, Long Water and Serpentine. Some of the built structures remain including the Palace and Orangery. In the later C18th and early C19th the formal layout was progressively softened, leaving largely open areas crossed by paths between entrances and features, and numerous mature trees. The Italian Garden dates from 1860s; the Albert Memorial was built in 1863-72. Among formal gardens around the Palace is the sunken Dutch Garden of 1908-9. The Princess Diana Memorial Playground opened in 2000.