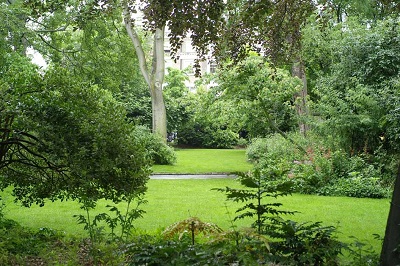 Thurloe Place, on the left, leads to Thurloe Square.

This private communal garden was provided for residents of Thurloe Square, which was built on the Thurloe Estate. The Estate had passed to John Alexander in 1799, who began house development on the land from 1826. His son Henry Browne Alexander undertook the second phase of building from 1840, which included Thurloe Square. The south-west corner was demolished to make way for the underground railway in 1867. The garden has lawn, shrubberies, borders and flower beds, numerous mature trees and original railings.