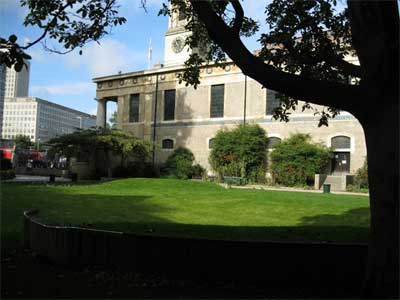 From Waterloo Station, use exit 2 opposite platform 5 (escalators or lift available) into Waterloo Road. Cross and turn left to reach the church of St John the Evangelist.

St John the Evangelist by Francis Bedford is one of several churches built in 1822-4 to commemorate Wellington's victory over Napoleon at the Battle of Waterloo. The church was badly bombed in WW2 and in 1951 was restored and opened to serve as the parish church of the Festival of Britain. The churchyard was transformed into a garden in 1877 and social reformer Octavia Hill has traditionally been connected with it. North of the church is a number of fine tombs and a war memorial. A garden of remembrance was created in 2000 and there are mosaics and a small playground. The St John's Churchyard Friends Group has begun the creation of a community knot garden. See www.stjohnswaterloo.co.uk.