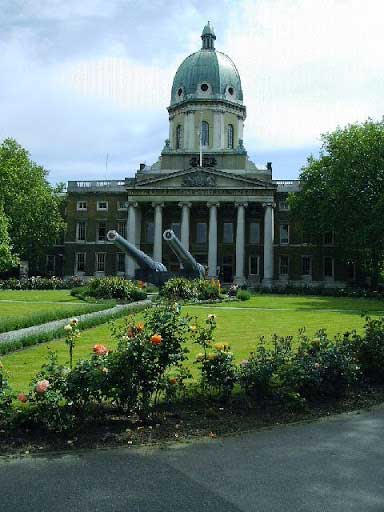 The Imperial War Museum, within the park, occupies the remains of the Bethlem Royal Hospital for the Insane, built in 1815. The asylum was built on land known as St George's Fields, a marshy area used for agriculture, fairs, pony races and other entertainments. From 1731 local mineral water was sold from a small public house which had existed since at least 1642. The pub was renamed St George's Spa and by 1758 provided tea rooms, a music gallery, ladies' and gentlemen's baths, skittle grounds and a bowling green. It was closed in 1799, having become notorious and rowdy. The area was also used for archery practice and the construction of two Commonwealth forts.

The Lodge on Lambeth Road, which dates from 1837, was built when the road layout in front of the hospital was changed; the ground gained was enclosed and planted.

In 1926, when the hospital moved to Beckenham, the land and buildings were purchased by Viscount Rothermere, proprietor of the Daily Mail, who presented it to the LCC for use as a public park in memory of his mother, Geraldine Mary Harmsworth. It was opened in 1934 and in 1938 a children's lido was added.

In the park is a section of the Berlin Wall and a Soviet War Memorial to the 27 million citizens and service personnel who died for Allied victory in WWII. A tree trail created by Trees For London links 34 native trees that colonised Britain after the last ice age. There is a map and information board in the Peace Garden (see below). The park has picnic benches, seasonal refreshments, a sundial, playground, playroom and sports area. Café and accessible toilets are available in the Imperial War Museum (free entry).