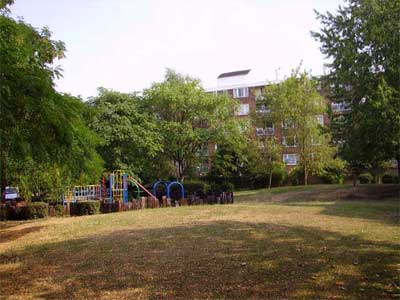 Turn right into Lollard Street, and continue along Old Paradise Street. At the end on the left is Lambeth High Street Recreational Ground.

The land was originally provided to the parish by Archbishop Thomas Tenison of Canterbury for a burial ground. The site had been leased to a gardener and was purchased for £120 in 1703. It was extended in 1816 but, being full, was closed in 1853. By 1880 it was 'very unsightly' and the vestry decided to turn it into a public garden, which was completed in 1884. Gravestones were moved to boundary walls with the mortuary left standing. A watch house erected on High Street for holding 'the drunk and disorderly' in 1825 was originally left but is now gone, its site marked with a stone. The new garden was conveyed to Lambeth Vestry and then to Lambeth Borough Council. In 1929 it was enlarged when the site of a glass bottle factory in Whitgift Street was purchased for £700.

Since the late 1970s the recreation ground has been re-landscaped with grassy mounds, pergolas, shrubs and spring bulbs. A water feature and a playground are provided.