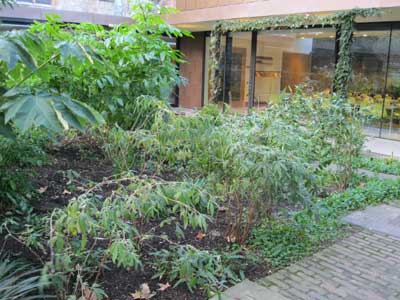 The Church of St-Mary-at-Lambeth (now the Garden Museum) dates from 1377 and was restored by Philip Hardwick in the 1850s. Royal gardeners John Tradescant the Elder and John Tradescant the Younger, who introduced many plants to England, are buried here in a hard sandstone tomb with high relief carvings. They established a physic garden in South Lambeth and their collections eventually went to the Ashmolean Museum in Oxford. The Coade stone sarcophagus of Admiral William Bligh, Captain of the 'Bounty', was erected in 1817.

By 1971 the church was redundant and threatened with demolition, and the churchyard unkempt. In 1977 the Tradescant Trust was formed and campaigned to save the church and turn it into a museum. A replica 17th century knot garden, designed by Lady Salisbury, opened in the churchyard in 1983. The garden features plants of the period, a large climbing musk rose, reputedly the largest in the country, old brick paths, a sundial and retained gravestones. The Garden Museum is open daily 10:30-5 but closed Christmas/New Year. Café, accessible toilet and shop.