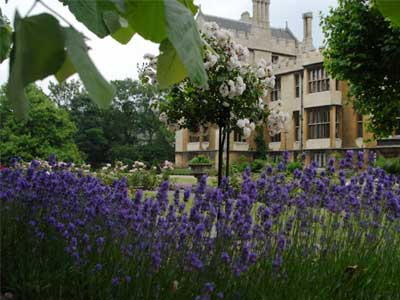 Beside the church is Lambeth Palace. The main entrance is through Morton's Gateway to the south-west. The gardens are open to the public on occasions.

Go east along Lambeth Road and enter Archbishop's Park to the left opposite number 109.

Since the 13th century, Lambeth Palace has been the London home of the Archbishops of Canterbury and the building incorporates fabric from that time. The gardens and park of the medieval palace originally covered eight hectares, but more than half the land was given over to create Archbishop's Park in the 19th century. The remaining gardens were renovated by Archbishop Laing in the 1920s and a rose terrace was added in the 1930s. There are trees grown from fig cuttings planted in the mid-1550s.The gardens were restored again in 1986-88, largely at the instigation of Rosalind Runcie. The woodland was thinned, a pool created and new features added, including an Elizabethan-style herb and physic garden, a Palladian temple, a pleached lime hedge and a border by Beth Chatto. A Chinese feature by Faith and Geoff Whiten was relocated from the Chelsea Flower Show. More recently, Archbishop George Carey and his wife concentrated on developing the wildlife potential of the garden, planting some 300 native trees and renovating the pond to encourage biodiversity. Future plans include developing the old orchard next to the palace and a wildflower meadow. A number of sculptural works in the garden include 'Girl with Swallows' by David Norris, and 'Mother and Child' by Lesley Emma Pover.