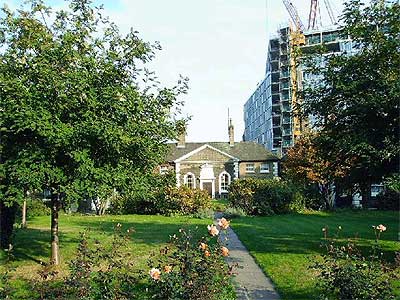 Exit into Blackfriars Road. The road cut through the area in 1769, when Blackfriars Bridge was built. Cross into Burrell Street, continuing left into Bear Lane, and cross Southwark Street into Hopton Street (by the Holiday Inn) to Hopton's Almshouses.

Hopton's Almshouses were founded by fishmonger Charles Hopton, who died in 1730. The 26 almshouses for 'poor decayed men' of the parish were erected in 1746-9 and opened in 1752. The residents, who included gardeners, watermen and fishermen were also granted £6 per year and 32 bushels of coal. In 1825 two extra houses were added. The complex includes two garden squares with centre lawns and roses, edged with shrubs. Outside the gates is a drinking fountain and cattle trough. The almshouses were rebuilt and modernised in 1988 and remain used for housing owned by The Anchor Trust.