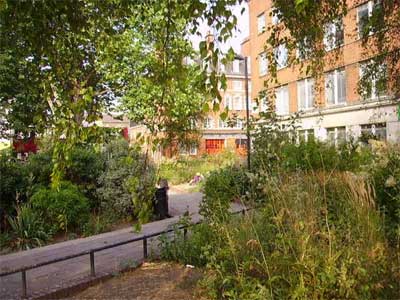 Exit on the far side and turn left along Mitre Road, right at Webber Street and cross The Cut to the Emma Cons Garden.

To return to the station go right along Waterloo Road. To continue, cross into Baylis Road and enter Waterloo Millennium Green.

This small street garden commemorates the Old Vic's benefactress, Emma Cons, 'an ardent reformer and legendary impresario' who managed the theatre from 1880 until her death in 1912. The Old Vic opened in 1818 as the Royal Coburg Theatre and changed to the Victoria Theatre in 1833. In 1879 it was bought by public subscription and given to the Coffee Palace Association, which provided musical and variety acts as well as lectures. The site opposite the theatre was bombed in WWII and was derelict until purchased by the LCC and opened as a public garden in 1958, originally laid out with trees, raised grass plots and seats, and since re-landscaped. The site has lighting provided by the Old Vic and was refurbished in association with Putting Down Roots.