The Story of Pulhamite Rockwork 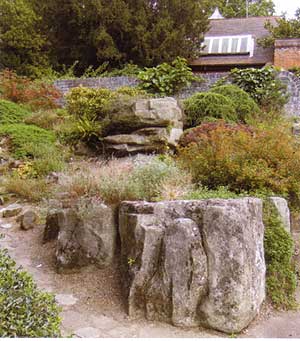 Pulhamite used in the path system at Coombe Wood, Croydon

As new plants flooded into the UK in the nineteenth and early twentieth centuries, rockeries were all the rage in British gardens. Many were built on a grandiose scale to display rare and unusual alpine and mountain plants, both in private gardens and later in public parks. A large rockery might have mini-ravines, grottoes, waterfalls and even purpose-built caves.

Building rockwork on this scale was expensive, particularly when the rock had to be imported from elsewhere in the UK or even from abroad. So enterprising builders and landscape architects came up with a range of ingenious alternatives in the form of artificial rockwork.

One of the most successful creators and suppliers of artificial rockwork and features was the firm of James Pulham who, for over a century from the 1830s to the 1940s, designed and built rockeries, rock gardens and grottoes in parks and gardens all around the UK, using their proprietary artificial cement render, called Pulhamite.

Pulhamite took several forms but is most recognisable as a distinctive pinkish, lime-based cement. This was used by the firm from the 1830s to the 1870s to cover brick-built foundations and was worked to simulate real rocks. Great care was taken to make the rockwork realistic, even copying the local geology and including local rocks in the finished product. Pulhamite was in great demand during this period, with over 170 major projects constructed around the UK.

Pulham prided themselves on the quality of their product and 'Durability guaranteed' was their company slogan. This durability was to be tested to its limit in public parks during the twentieth century, when lack of maintenance allowed weeds and scrub trees to encroach on many of the features and the water was turned off on the waterfalls. 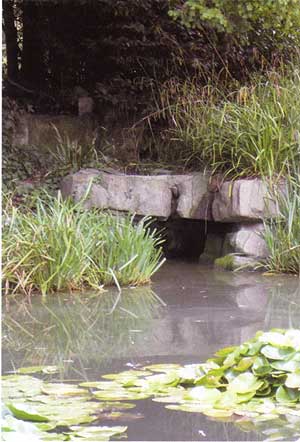 Pulhamite used in an ornamental pond at Coombe Wood, Croydon

By the late twentieth century garden historians started to look afresh at Pulhamite structures. In recent years many have been restored, often with the help of lottery funding. In London there are Pulhamite islands in the lake in St James's Park (the waterfowl perch on these behind Duck Island Cottage). Other examples of Pulhamite waterfalls and rockwork open to the public exist in Battersea Park, in the grounds of the Bishop's Palace, Bromley, and in Coombe Wood, Croydon.

The Pulham family continued in business after World War 1, but the scope for projects on a large scale faded away and the firm finally closed in 1945. The company records are largely lost but, thanks to the untiring efforts of Claude Hitching, members of whose family worked for Pulharn's, a great deal of work is now being recorded for posterity. Claude himself is working on a book on the history of the company. Meanwhile he maintains a comprehensive website at http://www.pulham.org.uk, which is well worth visiting.

In recognition of the growing interest in artificial rockwork and its restoration, English Heritage has published a Technical Advice Note on the history and restoration of Pulhamite. The book is entitled Durability Guaranteed - Pulhamite rockwork - Its conservation and repair. The EH reference code for the book is 51339 (EH 01/08 HAW 4000). The book includes a gazetteer of all known sites. It can be obtained from EH's Customer Services Department, PO Box 569, Swindon SN2 2YD; tel: 0970 3331181; email customers at english-heritage.co.uk.